Some great news about Vacation properties released a few days ago from the National Association of Realtors  …  No wonder Palm Springs is a top vacation destination! 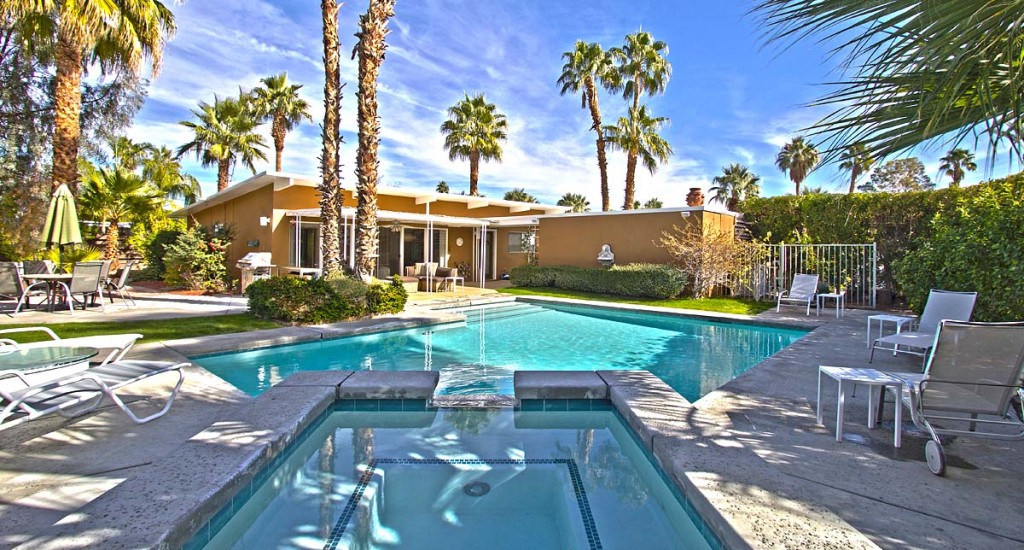 Vacation home sales boomed in 2014 to above their most recent peak level in 2006, while investment purchases fell for the fourth straight year, according to an annual survey of residential homebuyers released today by the National Association of Realtors®.

And we know that from the real estate sales activity we’ve been experiencing here in Palm Springs !  The Racquet Club in Palm Springs (view current available listings) is a great place for the fun, architectural, and easy to maintain vacation homes.

Here is the story:

Vacation home sales are up 57.4% from last year, according to the National Association of Realtors 2015 Vacation and Investment Home Buyers survey.
NAR’s 2015 Investment and Vacation Home Buyers Survey,* covering existing- and new-home transactions in 2014, shows vacation-home sales catapulted to an estimated 1.13 million last year, the highest amount since NAR began the survey in 2003. Vacation sales were up 57.4 percent from 717,000 in 2013.

Investment-home sales in 2014 decreased 7.4 percent to an estimated 1.02 million in 2014 from 1.10 million in 2013. Owner-occupied purchases fell 12.8 percent to 3.23 million last year from 3.70 million in 2013. The sales estimates are based on responses from nearly 2,000 U.S. adults who purchased a residential property in 2014, and exclude institutional investment activity.

Lawrence Yun, NAR chief economist, says vacation sales in 2014 showed astonishing growth, nearly doubling the combined total of the previous two years. “Affluent households have greatly benefited from strong growth in the stock market in recent years, and the steady rise in home prices has likely given them reassurance that real estate remains an attractive long-term investment,” he said. “Furthermore, last year’s impressive increase also reflects long-term growth in the numbers of baby boomers moving closer to retirement and buying second homes to convert into their primary home in a few years.”

Vacation-home sales accounted for 21 percent of all transactions in 2014, their highest market share since the survey was first conducted. The portion of investment sales fell to 19 percent (20 percent in 2013); owner-occupied purchases declined to 60 percent (67 percent in 2013).

“Despite strong rental demand in many markets, investment property sales have declined four consecutive years to their lowest share since 2010 as rising home prices and fewer distressed properties coming onto the market have further reduced the number of bargains available to turn into profitable rentals,” says Yun.

One-third of vacation buyers plan to use their property for vacations or as a family retreat, 19 percent plan to convert their vacation home into their primary residence in the future, and 13 percent bought for potential price appreciation; the same share purchased because of low real estate prices and because the buyer found a good deal.

NAR released a study in late-2014 that identified the top housing markets likely to see a boost in home sales to leading-edge baby boomers1. The findings revealed that metro areas – including many in the South and Southwest – with a lower cost of living and sunnier weather are poised to see an increased number of baby boomers moving in and buying a home in coming years.

Investment buyers purchased property for a variety of reasons, including for rental income (37 percent), because of low prices and the buyer found a good deal (17 percent) and for potential price appreciation (15 percent). Overall, investment buyers plan to hold onto the property for a median of five years (unchanged from a year ago), and a majority (68 percent) are very or somewhat likely to buy another investment property in the next two years.

The bulk of investment buyers (86 percent) and vacation buyers (85 percent) reported that now is a good time to purchase real estate.

NAR’s 2015 Investment and Vacation Home Buyers Survey, conducted in March 2015, surveyed a sample of adults that had purchased any type of residential real estate during 2014. The survey sample was drawn from a representative panel of U.S. adults monitored and maintained by an established survey research firm. A total of 1,971 qualified adults responded to the survey. Consumers were sampled to meet age and income quotas representative of all home buyers drawn from NAR’s 2014 Profile of Home Buyers and Sellers.

The 2015 Investment and Vacation Home Buyers Survey can be ordered by calling 800-874-6500, or online at www.realtor.org/prodser.nsf/Research. The report is free to NAR members and accredited media and costs $149.95 for non-members.

The National Association of Realtors®, “The Voice for Real Estate,” is America’s largest trade association, representing 1 million members involved in all aspects of the residential and commercial real estate industries.

1Baby boomers are generally categorized as those born in the U.S. between 1946 and 1964. NAR’s research analyzed leading-edge baby boomers (ages 60-69).

Information about NAR is available at www.realtor.org. News releases are posted in the website’s “News, Blogs and Videos” tab. Statistical data in this release, as well as other tables and surveys, are posted in the “Research and Statistics” tab.