The attire is black tie at the Film Awards Gala, which honors the best achievements of the year by a list of celebrated talents. 2022 awards include the Spotlight Award to Kristen Stewart of her work in Spencer, the International Star Award to Penelope Cruz for Parallel Mothers, the Desert Palm Achievement Award to Jessica Chastain for The Eyes of Tammy Faye, and Director of the Year Award to Jane Campion for The Power of the Dog. 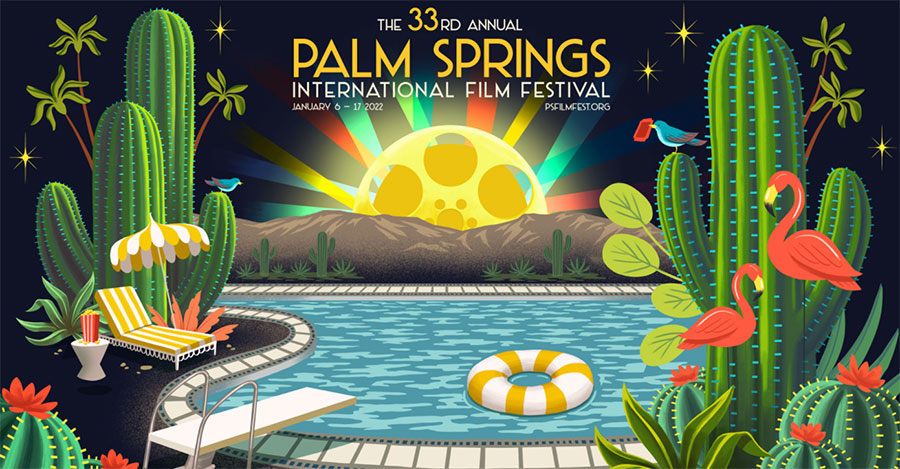 Seats and tables for the Film Awards ceremony, to be held at the Palm Springs Convention Center, are now on sale as are full Festival passes. Tickets for individual screenings go on sale in December. The Festival’s film screenings begin on Friday, January 7th, including the “Opening Night” film presentation, and will conclude with the “Best of Fest” on January 17.

According to the Palm Springs International Film Festival website, this is one of the largest film festivals in North America, welcoming over 135,000 attendees each year for its lineup of new and celebrated international features and documentaries from over sixty countries.

To keep all patrons as safe as possible, the Film Festival will require all attendees (pass holders and ticket holders), volunteers, staff, guests, sponsors, media, and vendors to show valid proof of full vaccination in order to enter Festival venues and events. Additionally, theater capacities will be limited to no more than 75% and masks are required for all.

Here’s a link to the PSIFF website for full Festival information.

By Jerry Braun.  Images courtesy of the PSIFF website.